Hurrah! The snow has gone!!
As pretty as it looked, after only a few days it became a bit tiresome, not only preventing me getting to the office on a few days (during a very busy time) but also stopping me from really getting into the garden. But thankfully the blanket covering has vacated the suburban veg plot.
This weekend was a hive of activity - moreso in the kitchen than on the plot. Paper potting ahoy! All of my tomato, chilli and sweet pepper seeds have now been sown in little paper pots and the seeds trays placed on my lovely heated kitchen floor. 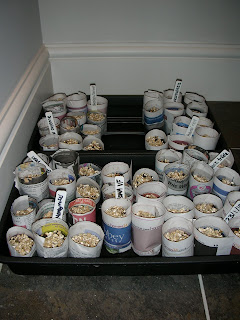 Feltham First peas have been sown - I'm experimenting with the guttering method this year rather than direct sown. I had my builder from last year leave me 2 pieces of guttering cut to 1m length (the width of my raised beds). 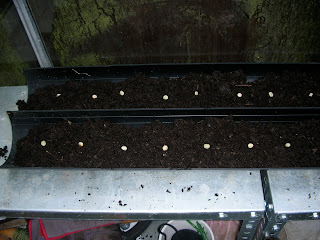 The idea is that once germinated and ready to plant out, I need only to dig a shallow trench and then slide out the contents of the guttering, pea plants and all! I now have them filled and covered with holly to keep off any hungry mice. 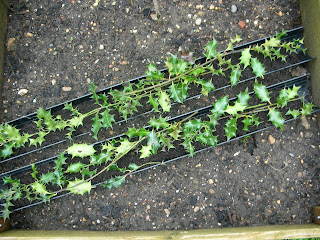 Lancashire lad purple podded peas along with Autumn Mammoth 2 leeks have also been sown - the former in loo roll tubes and latter in a 5'' pot. I'm hoping to do better with successional swing this year, so I have another leek variety to sow in a month's time. Last years leeks were started off slightly later than planned and so we've had the benefit of them only since November. They've been great as baby leeks though - brushed in olive oil and cooked on a griddle pan - mmmm. Will be nice to see what they're like fully grown this season!
Posted by suburban veg gardener at 7:33 PM No comments: 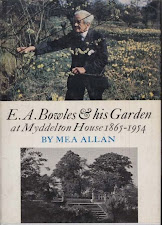